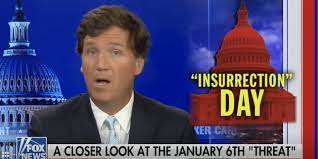 As the first prime-time hearing of the House select committee investigating the Jan. 6, 2021, attack on the U.S. Capitol gaveled in, Fox News host Tucker Carlson opened his show Thursday bragging about his network not carrying the proceedings live on its main cable channel.

According to The Hill, “This is the only hour on an American news channel that won’t be covering their propaganda live,” Carlson said of the committee. “They are lying and we are not going to help them do it.”

Fox News took heat this week from Democrats and media pundits after it announced it would carry live continuous coverage of Thursday night’s hearing only on Fox Business Network and its other streaming, digital platforms. It will also make its coverage available to its local affiliates across the country.

But Fox did not on Thursday pre-empt Carlson’s top-rated opinion program, which the host has used over the last several weeks to cast doubt on the committee’s assertions and suggest the controversy over the violent attack on the Capitol has been overblown.

On Thursday night, the committee made the case that former President Trump worked to overturn the 2020 presidential election and incited the mob that stormed the Capitol that day. Carlson called the attack “forgettably minor by recent standards.”