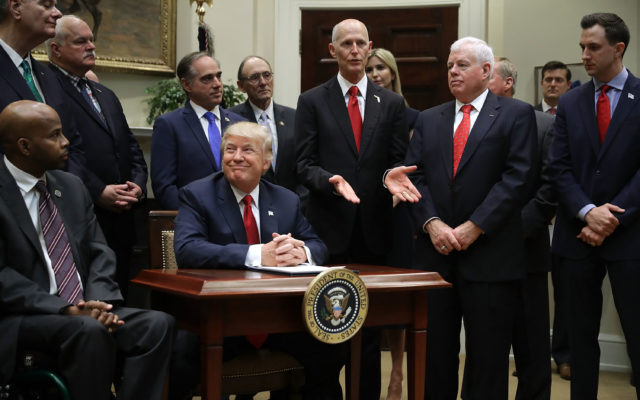 WASHINGTON, DC - APRIL 19: Florida Governor Rick Scott (C) delivers brief remarks after U.S. President Donald Trump signed the Veterans Choice Program And Improvement Act with representatives of veterans' organizations, politicians and members of his administration, including Veterans Affairs Secretary David Shulkin, in the Roosevelt Room at the White House April 19, 2017 in Washington, DC. The legislation, which expiries later this year, sets aside $10 million to extend the Choice Card program, which allows veterans who face lengthy wait times for VA hospital appointments or live more than 40 miles from VA clinics to use the program to seek private-sector medical care instead. (Photo by Chip Somodevilla/Getty Images)

The “public charge” rule is part of the Trump administration’s broader push to favor skilled applicants and those who are less likely to rely on public assistance. The government estimates some 380,000 applicants would be immediately subject to review under the new guidance after they are finalized in October.

Critics vowed to challenge the regulation in court, charging that it unfairly penalizes low-income immigrants — particularly those of color — and warned it would stoke fear in immigrant communities.

Following the announcement of the final rule, the National Immigrant Law Center has announced it will file a lawsuit against the policy.

“We look forward to seeing Trump in court — again — and to seeing justice prevail as we defend immigrant families and our democracy,” Hincapié added.