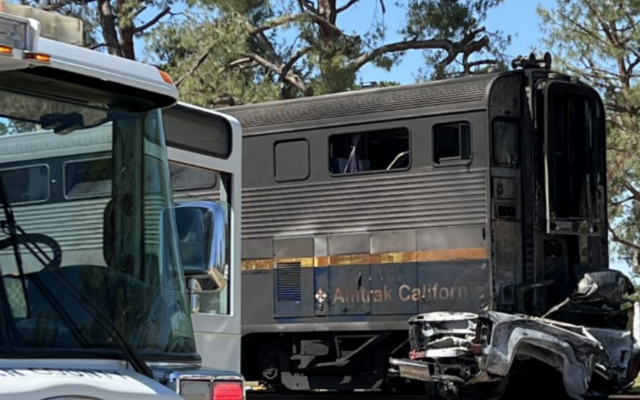 One person was killed and three others were injured when an Amtrak passenger train carrying 137 people from Oakland to Bakersfield collided with a truck in Shafter.

Kern County Fire officials said the incident occurred Friday at around 2:00 p.m. on the tracks at Santa Fe Way between Orange and Burbank Streets.

KCFD reports the pickup burst into flames as it was dragged along the tracks several hundred feet before coming to a stop. One person inside the pickup was pronounced dead at the scene.

Three train passengers suffered minor injuries. Smoke from the truck damaged a portion of the train car that collided with the truck.

Amtrak officials report the train passengers were able to climb out of the train and gathered at a nearby cemetery until buses arrived to drive them to the station in Bakersfield.

The train was traveling in a “push” mode where the train’s locomotive was at the rear of the train.

There’s no word why the driver of the pickup attempted to cross the tracks.