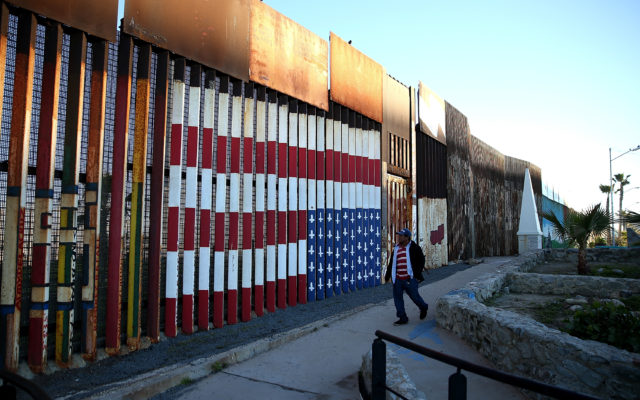 TIJUANA, MEXICO - JANUARY 27: A view of the US-Mexican border fence at Playas de Tijuana on January 27, 2017 in Tijuana, Mexico. U.S. President Donald Trump announced a proposal to impose a 20 percent tax on all imported goods from Mexico to pay for the border wall between the United States and Mexico. Mexican President Enrique Pena Nieto canceled a planned meeting with President Trump over who would pay for Trump's campaign promise to build a border wall. (Photo by Justin Sullivan/Getty Images)

Top officials from the U.S. and Mexico will soon begin talks in a scramble to fend off Donald Trump’s threat of tariffs on imports from the southern ally and meet his demand for fewer migrants at the border. On Monday, Mexican Economy Minister Graciela Marquez will meet with Commerce Secretary Wilbur Ross.

Two days later, delegations led by Secretary of State Mike Pompeo and Foreign Relations Secretary Marcelo Ebrard will also meet in Washington. The president will be notably absent from these discussions, however.
Mr. Trump claims Mexico has taken advantage of the United States for decades but that the abuse will end when he slaps tariffs on Mexican imports. His frustration with the flow of migrants is nothing new, but it’s a subject he often returns to, as he did last week after special counsel Robert Mueller’s rare public statement on the Trump-Russia report.

The president said last week that he will impose the tariffs to pressure the government of Andres Manuel Lopez Obrador to block Central American migrants from crossing the border into the U.S. Once implemented, the import tax will increase by 5% every month through October, topping out at 25%.

CLICK HERE to read the original/full story from www. cbsnews.com