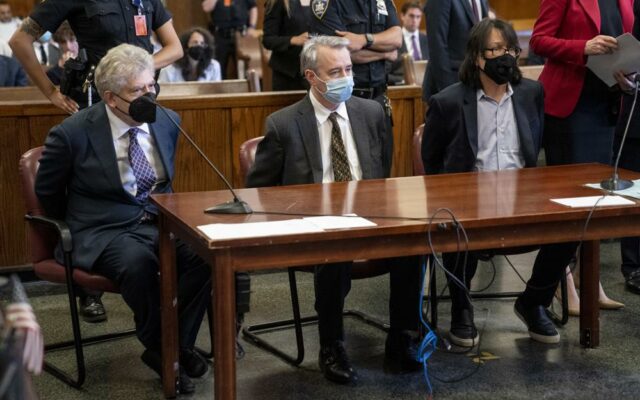 A rock memorabilia dealer and two other men were charged Tuesday with scheming to sell allegedly ill-gotten, handwritten lyrics to the classic rock juggernaut “Hotel California” and other hits by the Eagles.

The Associated Press reports prosecutors said the trio lied to auction houses and buyers about the manuscripts’ fuzzy chain of origin, coaching the person who provided the material about what to say. Meanwhile, the men tried to thwart Eagles co-founder Don Henley’s efforts to reclaim the items, according to prosecutors.

“They made up stories about the origin of the documents and their right to possess them so they could turn a profit,” Manhattan District Attorney Alvin Bragg said.

Through their lawyers, rock auctioneer Edward Kosinski and co-defendants Glenn Horowitz and Craig Inciardi pleaded not guilty to conspiracy charges. Kosinski and Inciardi were also charged with criminal possession of stolen property, and Horowitz was charged with attempted criminal possession of stolen property and two counts of hindering prosecution. They were released without bail.

Their lawyers insist the men are innocent.