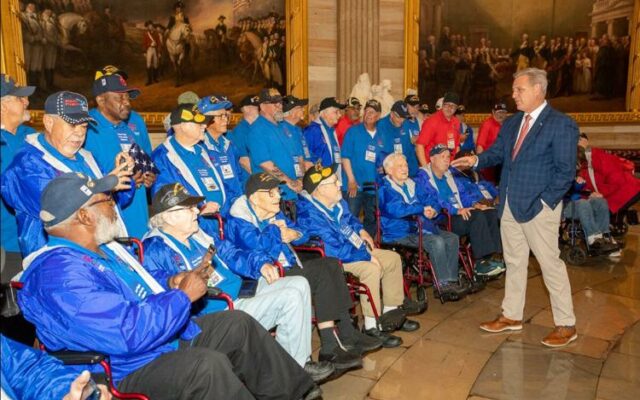 KNZR’s traffic and news reporter Tony Lee is among the more than ninety U.S. military veterans touring the memorials in their honor in the nation’s capital.  Lee was a fighter pilot with the U.S. Navy in Vietnam. (Back row, third from the left.)

Kern County Honor Flight #44 left for Washington, D.C on May 4 and returns May 6.

Bakersfield Congressman Kevin McCarthy welcomed the veterans to the nation’s capital on Wednesday.

Veterans take guided tours of the memorials, including the World War II, Korean, Vietnam, Lincoln, Women’s, Navy, Marine and Air Force memorials. They also witness the changing of the guard at the Tomb of the Unknowns at Arlington National Cemetery.

Since its first flight in 2012, the all-volunteer nonprofit has flown more than 1,700 veterans to the nation’s capital, according to the Bakersfield Californian.

Kern County Honor Flight will hold a ‘Welcome Home’ ceremony Thursday, May 5 at 6:00 p.m. at the North High gymnasium.