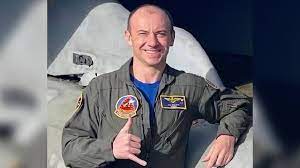 The U.S. Navy has identified a fighter jet pilot killed in a training flight crash near Trona.

Lt. Richard Bullock was behind the controls of an F/A-18E Super Hornet that crashed during a routine training mission at around 2:30 p.m. June 3rd near the community of Trona in a remote area of the Mojave Desert.

Bullock was assigned to Strike Fighter Squadron 113 based at Naval Air Station in Lemoore.

The cause of the crash remains under investigation. Recovery efforts continue at the crash site.