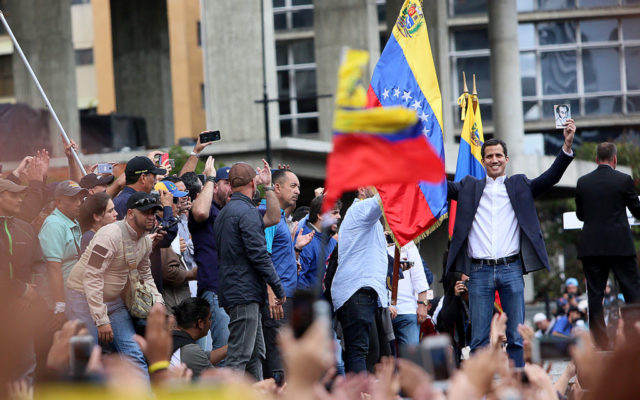 CARACAS, VENEZUELA - JANUARY 23: Venezuelan opposition leader and head of the National Assembly Juan Guaido declares self interim president as thousands of people protest against Nicolás Maduro on January 23, 2019 in Caracas, Venezuela. Many countries including the US, Canada and Chile have recognized officially recognized Guaido as the legitimate president of Venezuela. Head of Supreme Justice tribunal Juan Jose Mendoza urged general attorney to act against a constitution violation. (Photo by Edilzon Gamez/Getty Images)

After staging a failed uprising, the Western-backed Venezuelan opposition is seeking a meeting with U.S. military officials to discuss “strategic” and “operation” planning to bolster its leadership challenge against the leftist government of Nicolás Maduro.

Citing the worsening of conditions in crisis-stricken Venezuela and the presence of “uninvited foreign forces” in the country, Carlos Vecchio, the opposition’s envoy in Washington, asked officials from the U.S. Southern Command to set up a meeting in the near future to enhance “cooperation.” U.S. officials have frequently said Russian and Cuban military units are helping Maduro cling to power.

President Trump and official in his administration have not ruled out military action in the crisis-stricken South American country, repeatedly saying that “all options are on the table.”

CLICK HERE to read the original/full story from www.cbsnews.com