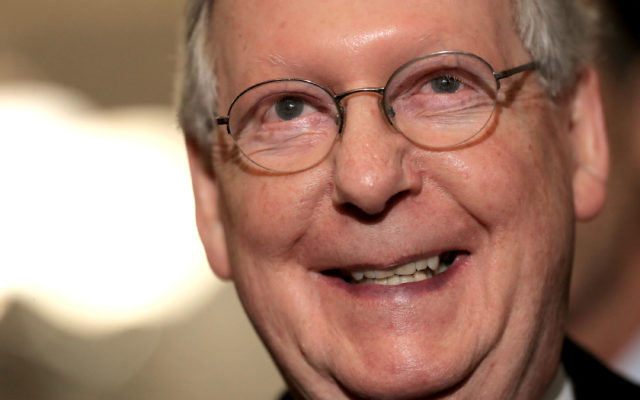 WASHINGTON, DC - NOVEMBER 28: Senate Majority Leader Mitch McConnell (R-KY) talks with reporters following the weekly Senate Republican Policy Committee luncheon in the U.S. Capitol November 28, 2017 in Washington, DC. Republicans in the Senate hope to pass their tax cut legislation this week and work with the House of Representatives to get a bill to President Donald Trump before Christmas. (Photo by Chip Somodevilla/Getty Images)

McConnell called Pelosi’s effort to “hand-design” the proceedings in the Senate a “non-starter” and a “fantasy.”

Moments later, Senate Minority Leader Chuck Schumer, D-N.Y., defended his party’s efforts to seek certain high-level witnesses and documents, noting how recently published emails have started to fill out the details of the administration’s decision to freeze aid to Ukraine while the president sought politically advantageous investigations from Kiev. Schumer said it is imperative to learn the “whole truth,” while voicing concern McConnell could end up holding a “mock trial.”

McConnell, though, indicated the Senate process is at a standstill for now, as he accused the House of getting “cold feet.”

“The same people who spent weeks screaming that impeachment was so urgent … now decided it could wait indefinitely while they check the political winds and look for some new talking points,” he said.

CLICK HERE to read the full article at www.foxnews.com