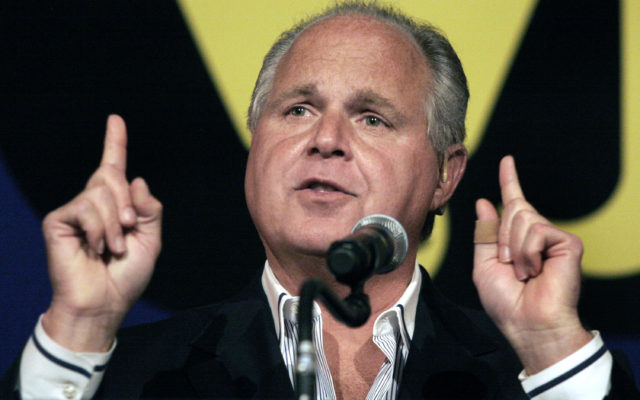 NOVI, MI - MAY 3: Radio talk show host and conservative commentator Rush Limbaugh speaks at "An Evenining With Rush Limbaugh" event May 3, 2007 in Novi, Michigan. The event was sponsored by WJR radio station as part of their 85th birthday celebration festivities. (Photo by Bill Pugliano/Getty Images)

The 69-year-old conservative talk pioneer closed his broadcast with the grim news, saying he will be leaving his golden EIB microphone for treatment, but hopes to return later this week.

“This day has been one of the most difficult days in recent memory, for me, because I’ve known this moment was coming,” Limbaugh said. “I’m sure that you all know by now that I really don’t like talking about myself and I don’t like making things about me… one thing that I know, that has happened over the 31-plus years of this program is that there has been an incredible bond that had developed between all of you and me.”

Limbaugh told listeners that the disease will keep him off the air on certain days when he’ll receive treatment. He said two medical institutions confirmed the diagnosis since he first realized something was wrong on Jan. 12 when he experienced shortness of breath.

“I thought about not telling anybody,” he said. “It is what it is. You know me, I’m the mayor of Realville. This has happened and my intention is to come here every day I can, and do this program as normally and competently and expertly as I do each and every day because that is the source of my greatest satisfaction professionally, personally.”

Limbaugh called his listener base one of “the greatest sources of confidence” that he’s ever had in his life.

“I hope I will be talking about this as little as necessary in the coming days, but we’ve got a great bunch of doctors, a great team assembled, we’re at full speed ahead on this,” Limbaugh said. “It’s just now a matter of implementing what we are going to be told later this week.”