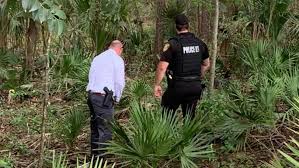 In a strange act of karma, a man died of a heart attack while trying to bury his girlfriend in his backyard.

She was wrapped in trash bags after authorities say McKinnon strangled her.

They say he may have cheated justice by dying before he could be arrested, but he still suffered a death sentence by trying to hide his crime.