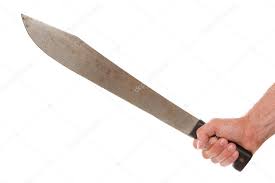 Authorities have identified a Bakersfield man who was arrested following a four-hour standoff with police after he allegedly took a machete onto a rooftop of a building in downtown Bakersfield.

Police responded at around 8:00 a.m. Wednesday to the 2300 block of Eye Street after receiving reports of a man on the roof of a business throwing rocks and debris at motorists

Officers located Raymond Valenzuela, 44, on the roof of the single-story building allegedly armed with a “machete-type” knife. Police say Valenzuela was destroying property on the roof.

Valenzuela repeatedly threatened to kill officers and himself, according to police.

Valenzuela surrendered at around 12:20 p.m. after negotiating with Bakersfield City Fire, the Mobile Mental Health Evaluation Team through Kern Behavioral Health and Recovery Services, and other personnel.  He was arrested without incident and was taken to a hospital for a complaint of pain.

Authorities say Valenzuela had a parole violation warrant. He is also charged with being under the influence of a controlled substance, felony vandalism, and resisting officers with violence.