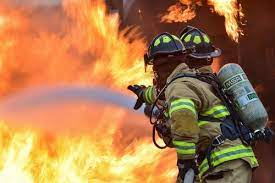 A Kern County firefighter has been injured during a blaze in east Bakersfield.

Flames broke out at around 3:00 a.m. Wednesday at a house on Withee Street near Potomac Avenue.

County crews knocked the fire down within about half an hour, but one of their members suffered moderate, non-life-threatening injuries during the operation.

The firefighter was treated at a local hospital, then released.

There’s no word from KCFD exactly how the injury happened.

No one was inside the home at the time of the fire.