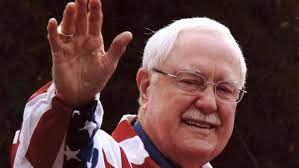 Hall Ambulance Company of Bakersfield is honoring its founder and former mayor Harvey Hall along with others who serve those in need.

The memorial was redesigned with blue granite, bronze lettering and stone to pay tribute to past and future fallen Hall Ambulance employees and Hall Ambulance Company founder Harvey L. Hall who founded the company in 1971.

Hall was first elected Bakersfield’s mayor in 2000 and was re-elected in 2004, 2008 and 2012. He was one of the longest-serving mayors in Bakersfield’s history.