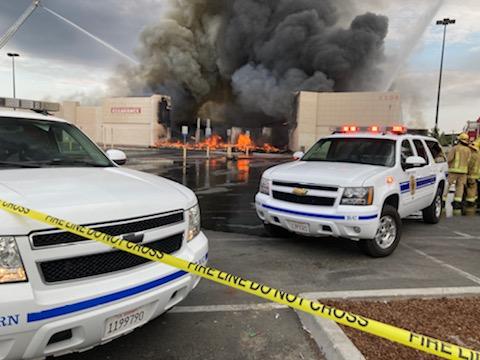 Bakersfield City and Kern County fire crews were on the scene of a three-alarm fire at a shopping mall in southwest Bakersfield.

Flames erupted Friday morning at approximately 3:30 at the mall which houses three businesses at 2300 White Lane.

KNZR’s Tony Lee reported from the scene a Planet Fitness store sustained major damage from smoke and flames, and American Freight, which sells mattresses, furniture and appliances, was gutted.  A third business was also destroyed.

Authorities say Friday’s fire which began in the loading dock is the third fire at that location in recent months.

No injuries have been reported.