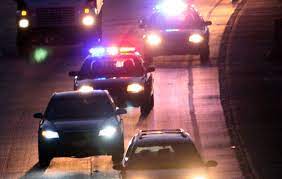 Officers were notified at around 9:00 a.m. of a possible DUI driver in a white flatbed work truck. A short pursuit ensued when the suspect was located on Kratzmeyer Road at Santa Fe Way.

During the chase, the truck collided with a parked, unoccupied Bakersfield Police Department patrol car. The suspect then deliberately drove off the roadway onto Jewetta Avenue north of Rosedale Highway and onto the railroad tracks where the vehicle became disabled.

The driver then fled on foot but was arrested on Lone Oak Drive at Mockingbird Court.

The CHP reports the truck was stolen.

The suspect faces charges of evading law enforcement, resisting arrest, hit-and-run, possession of a stolen vehicle and operating a motor vehicle while under the influence of drugs.

Trending
Connect With Us Listen To Us On