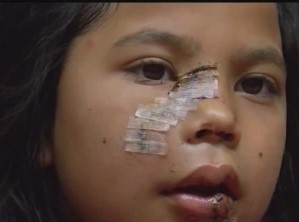 A lawsuit filed by the family of a girl who suffered facial scarring when a dog bit her face at a Bakersfield elementary school has been settled.

Leilani Rivera was 8 years old at the time of the incident on May 9, 2019 when a dog bit her at Wayside Elementary School.

Court records indicate volunteer readers Ann Ardell and Jeffery Jones brought two dogs into the classroom and invited students to pet them. The dog bit Rivera when she leaned forward to hug the animal.  The child suffered cuts to her face and lip and underwent surgery at Kern Medical.

KGET-TV reports the dogs were believed to be either Chows or Akitas. Both breeds are blacklisted from homeowners’ insurance policies in California due to their reputation for aggressive behavior.

The suit alleged general negligence on the part of district officials, saying they should have known it was dangerous to allow animals near students.