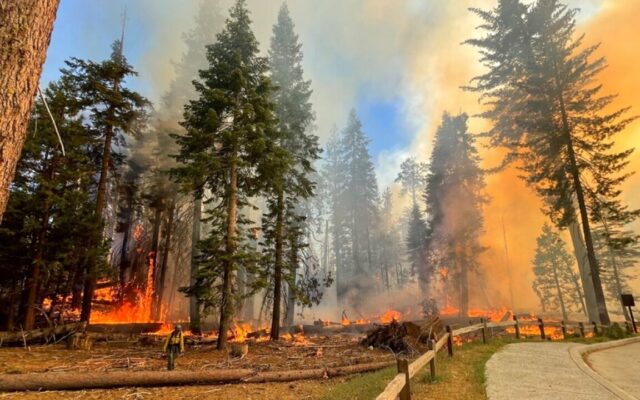 The largest grove of giant sequoias in Yosemite National Park was closed Friday as a wildfire burning through dense forest became the latest in recent years to threaten the world’s largest trees.

The Associated Press reports a team was being sent to the Mariposa Grove to wrap some of the massive trunks in fire-resistant foil to protect them as the blaze burned out of control, said Nancy Phillipe, a Yosemite fire information spokesperson.

More than 500 mature sequoias were threatened but there were no reports of severe damage to any named trees, such as the 3,000-year-old Grizzly Giant.

The cause of the fire was under investigation and the rest of the park remained open as nearly 300 firefighters tried to control the flames with the help of two water-dropping helicopters and an air tanker dumping flame retardant, Phillipe said.

The giant sequoias, native in only about 70 groves spread along the western slope of California’s Sierra Nevada range, were once considered impervious to flames but have become increasingly vulnerable as wildfires fueled by a buildup of undergrowth from a century of fire suppression and drought have become more intense and destructive.