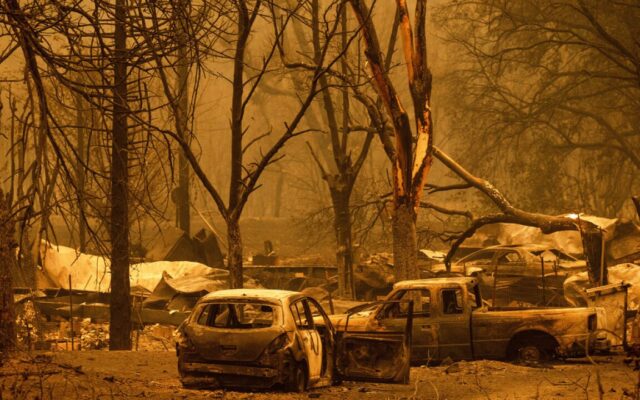 Courtesy AP
Crews battling the largest wildfire so far this year in California braced for thunderstorms and hot, windy conditions that created the potential for additional fire growth Sunday as they sought to protect remote communities.

According to the Associated Press, the blaze exploded in size to more than 80 square miles just two days after erupting in a largely unpopulated area of Siskiyou County. The cause was under investigation.

The blaze torched trees along California Highway 96, and the scorched remains of a pickup truck sat in a lane of the highway. Thick smoke covered the area and flames burned through hillsides in sight of homes. The fire Sunday cast an eerie, orange-brown hue, in one neighborhood where a brick chimney, stood surrounded by rubble and scorched vehicles.

A second, smaller fire just to the west that was sparked by dry lightning Saturday threatened the tiny town of Seiad, Freeman said. About 400 structures were under threat from the two California fires. Authorities have not confirmed the extent of the damage yet, saying assessments would begin when it was safe to reach the area.

A third fire, which was on the southwest end of the McKinney blaze, prompted evacuation orders for around 500 homes Sunday, said Courtney Kreider, a spokesperson with the Siskiyou County Sheriff’s Office. The office said crews had been on the scene of the fire since late Saturday but that the fire Sunday morning “became active and escaped its containment line.”