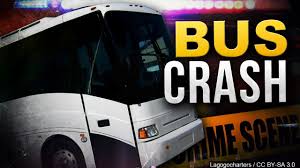 Thirteen people were injured Friday when a Greyhound bus blew a tire and veered into a sports utility vehicle and a center divider wall on a California desert highway.

Authorities with the California Highway Patrol say there were 33 people aboard the bus when it crashed in Banning, about 90 miles east of Los Angeles while heading from Los Angeles to Phoenix on Interstate 10.

Thirteen people were taken to hospitals but only one of those injured suffered a major injury, believed to be a compound fracture, and the rest had minor injuries.

The CHP says two of the injured people were in the Mitsubishi that was struck by the bus and the other 11 were from the bus.

The bus was traveling at about 60-65 mph when its left front tire blew out and it veered to the left and hit the Mitsubishi and then the center divider.

Uninjured bus passengers were taken to a tribal hall on the Morongo Indian reservation.