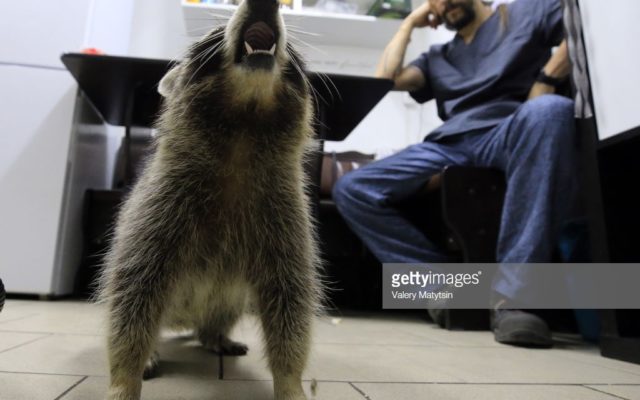 ROSTOV-ON-DON, RUSSIA - AUGUST 2, 2018: Yesha the Raccoon at Alexei Krotov's animal hospital. The raccoon is considered an employee by the clinic's staff as it greets people at the entrance and helps to bring new clients. Valery Matytsin/TASS (Photo by Valery MatytsinTASS via Getty Images)

It hasn’t happened in Bakersfield… yet… but it has happened n nearby mountain communities and the cities in the Valley may be closer to having such incidents than we think. As the population grows and encroaches more into areas formerly inhabited by wild animals, civilization is being threatened more and more by animals seeking food and shelter.

You’ve heard about bears rummaging through trash cans in mountain communities, and sometimes invading homes and cars, and now comes the story of a 2 year old toddler in Los Angeles being attacked by a Coyote that tried to drag the child away. Fortunately the father was near by and used a bottle of water to fend of the animal and save his daughter, who still needed rabies shots and treatment for scratches on her ankle, but is otherwise OK.

Meanwhile another attack was also caught on camera in Ashford Connecticut when a Ring camera video that went viral caught a raccoon grabbing a 5 year old by the leg on her doorstep. The child’s ’mother is seen pulling the animal off the girl while holding her child in one arm, eventually hurling the animal away and carrying her daughter safely back into the house.